ATLANTA – March 23, 2022 - Marsy’s Law for Georgia is proud to present Georgia Lt. Governor Geoff Duncan with its Champion Award Challenge Coin for his outstanding work in drafting and introducing the Criminal Record Responsibility Act (CRRA) and Victim Notification Package to the General Assembly. In addition, his support helped to get the bill passed in the State Senate unanimously. The legislation aims to begin the process of developing a comprehensive solution to the fragmented county court systems and inconsistent data entry throughout Georgia into the Georgia Crime Information Center (GCIC). By putting the State on track for consolidated criminal data, Georgia is set on the path toward a true statewide automated victim notification system.

“The Lt. Governor has been such a pivotal advocate to victims,” said Dr. Tamiko Pugh, Marsy’s Law Advisory Board Member, life coach, and victim rights advocate. “It is because of his tireless efforts that the Criminal Record Responsibility Act and Victim Notification Package passed through the Senate 53-0 and we have no doubt that the Georgia House of Representatives will respond similarly.”

Champion Award Challenge Coins are a keepsake that represents outstanding achievements within an organization and are awarded when individuals overcome tremendous obstacles to achieve their goals. Marsy’s Law for Georgia is proud to recognize individuals with challenge coins as a token of their commitment to justice and dedication to raising awareness of victims’ rights.

“The path to justice does not stop when a perpetrator has been arrested but continues throughout the trial process and beyond an offender’s sentencing,” said Lt. Governor Geoff Duncan. “With a focus on victims’ rights and modernizing the state’s criminal data reporting system, the Criminal Records Responsibility Act is designed to lessen the trauma and injustice for victims and those who have been exonerated with accurate and up-to-date data in the GCIC. I am honored to have worked closely with Marsy’s Law for Georgia on this bill and am humbled by this recognition.”

The passing of the CRRA bill comes at a momentous time as we approach National Crime Victims’ Rights Week April 24-30. More information on the CRRA can be found here and Victim Notification Package can be found here.

Photos of the event can be viewed here. 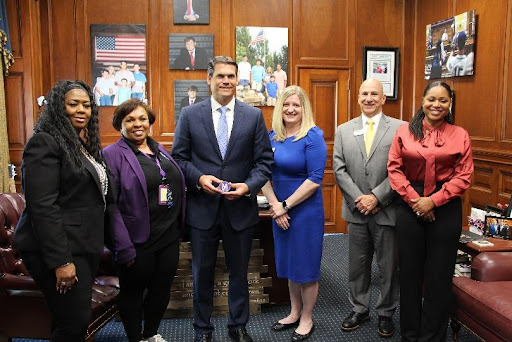 In 2018, Marsy’s Law amended the Georgia State Constitution to include a Bill of Rights for victims of violent crimes during criminal proceedings. The constitutional amendment received broad support and assures rights for victims, including standing to petition a court if they feel that their rights have been violated. Georgia is one of the numerous states across the country that have added Marsy’s Law to their constitutions in recent years. To learn more about Marsy’s Law Georgia, visit www.marsyslawga.com. Victims and supporters interested in sharing their stories can email [email protected].

Marsy’s Law is named after Marsalee “Marsy” Nicholas of California who was stalked and killed by her ex-boyfriend in 1983. Only one week after her death, Marsy’s mother and brother, Henry T. Nicholas, walked into a grocery store where they were confronted by the accused murderer. The family, who had just come from a visit to Marsy’s grave, was unaware that the accused had been released on bail. In an effort to honor his sister, Dr. Nicholas has made it his mission to give victims and their families' constitutional protections and equal rights. He formed Marsy’s Law for All in 2009, providing expertise and resources to victims’ rights organizations nationwide.

For more information on Marsy’s Law for All, please visit www.marsyslaw.us.