ATLANTA – October 22, 2020 – Marsy’s Law for Georgia is honored to present a Challenge Coin to Peter J. Skandalakis, Executive Director for the Prosecuting Attorneys’ Council of Georgia (PAC) and an advocate for crime victims’ rights, including domestic violence victims. Skandalakis was selected as a recipient based on his work with Marsy’s Law for Georgia, through a partnership with PAC, on the creation and launch of a new Georgia Crime Victims’ Rights Notification Card this month - Domestic Violence Awareness Month (DVAM).

Challenge coins are a keepsake that represents outstanding achievements within an organization and are awarded when individuals overcome tremendous obstacles to achieve their goals. Marsy’s Law for Georgia is proud to recognize individuals with challenge coins as a token of their commitment to justice and dedication to raising awareness of victims’ rights, particularly during the turbulent times of COVID-19. 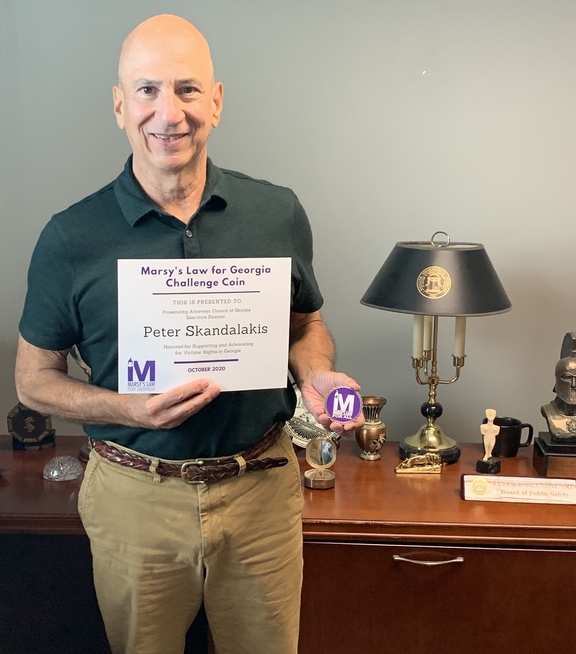 Marsy’s Law for Georgia and PAC’s partnership started in October 2019 when Marsy’s Law for Georgia approached the organization to help them design and launch a tangible state-wide Victims’ Rights Notification card that outlines victims’ rights under the Georgia Constitution and the Georgia Crime Victims Bill of Rights. The two organizations worked on the card for several months and planned to launch it during National Crime Victims’ Rights Week in April, but due to COVID-19 it was delayed and moved to DVAM.

“The pandemic may have stalled the launch of the notification card, but we are thankful that PAC and Director Skandalakis worked with us diligently to move the release date to Domestic Violence Awareness Month,” said Erinn Mahathey, national outreach director for Marsy’s Law for All. “Moving the release date to DVAM is also special because it helps bring extra resources to domestic violence victims to ensure they are aware of their rights under Georgia’s Marsy’s Law constitutional amendment,” she added.

To help raise awareness of the card, Marsy’s Law for Georgia and PAC worked on several marketing items, including a press release, educational webinar, and videos featuring Skandalakis. In one video, Skandalakis highlights the card’s importance and how to access it. In the second video, Skandalakis shares a special message to domestic violence victims saying that they are not alone and PAC is here to help.

“Partnering with Marsy’s Law for Georgia on the creation and launch of a new Georgia Crime Victims’ Rights Notification Card has been a tremendous accomplishment,” said Skandalakis. “Through this collaboration, we are able to further ensure that victims have the resources they need to better understand their rights. I look forward to future projects with Marsy’s Law for Georgia.”

Other Marsy’s Law for Georgia Challenge Coin recipients will be announced throughout the year. To nominate a crime victim’s advocate for consideration, please contact Maggie McDaniel at [email protected].

In 2018, Marsy’s Law amended the Georgia State Constitution to include a Bill of Rights for victims of violent crimes during criminal proceedings. The constitutional amendment received broad support and assures rights for victims, including standing to petition a court if they feel that their rights have been violated. Georgia is one of the numerous states across the country that have added Marsy’s Law to their constitutions in recent years. To learn more about Marsy’s Law Georgia, visit www.victimsrightsga.com. Victims and supporters interested in sharing their stories can email [email protected].

Marsy’s Law is named after Marsalee “Marsy” Nicholas of California who was stalked and killed by her ex-boyfriend in 1983. Only one week after her death, Marsy’s mother and brother, Henry T. Nicholas, walked into a grocery store where they were confronted by the accused murderer. The family, who had just come from a visit to Marsy’s grave, was unaware that the accused had been released on bail. In an effort to honor his sister, Dr. Nicholas has made it his mission to give victims and their families’ constitutional protections and equal rights. He formed Marsy’s Law for All in 2009, providing expertise and resources to victims’ rights organizations nationwide.

For more information on Marsy’s Law for All, please visit: www.marsyslaw.us.

Maggie McDaniel, on behalf of Marsy’s Law for Georgia